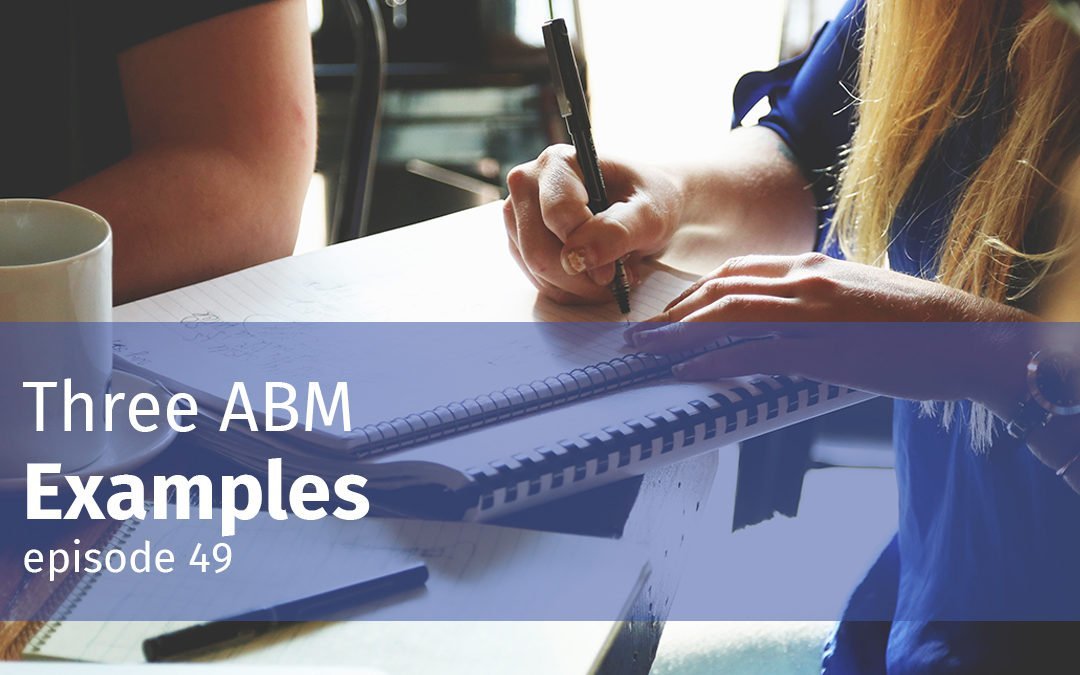 Welcome to another episode of 7-Minute Marketing with Pam. My name is Pam Didner. I love sharing a little dose of B2B, digital, content marketing and sales enablement, seven minutes at a time.

I came across a blog post by Influitive. Influitive offers an advocacy management platform. The blog title is “The Results of 3 B2B Account-Based Marketing Campaigns: The Good, the Bad, and the Ugly.” Truman Tang, the author of the blog, talked about 3 ABM campaigns Influitive ran. I don’t usually summarize a blog post, but I thought their 3 examples are worth sharing.

First of all, what is account-based marketing, anyway? Well, in a nutshell, it’s marketing working together with sales to create customized outreach for target accounts. It’s a planned and intentional effort. In a way, it’s a marketing version of sales enablement if you think about it.

So, here are 3 examples Influitive did

Influitive discovered that many of their target accounts were not aware of reviews of their own products. The marketing team decided to send their contacts at these accounts a personal package that contained a review about their companies on a third-party review website.

The marketing team thought it was a good introduction point for talking about what they could do to get more customer reviews.

The package included a handwritten note from the sales rep, a review from one of the prospects’ customers, and an Influitive sticker. Some packages also included an eBook about how to generate a sales pipeline with the help of customer advocates which is tied to the key benefits of Influitive’s products. The marketing team sent it in a nice box via UPS, which helped the track of the package so they knew when to follow-up. For this effort, they generated a 29% response rate and a 1.6% sales-qualified opportunities conversion rate. Not bad.

Truman did a quick AB testing. He sent 50% of accounts a less than positive review about their brands, and the other 50% a positive review. He observed that 95% of their responses came from people who had received positive reviews. It made sense to me. We all like people to say nice things about us, right.

For their next ABM effort, they decided to target companies that were ranked in Gartner’s Magic Quadrant—but could use more reviews.

They asked their salespeople to create custom videos that personally congratulated each company on their standing in the Magic Quadrant and sent the videos via Twitter. Then, the marketing team informed these accounts that they could get to the upper right (AKA the Holy Grail) of the quadrant with the help of their customers. They sent out a small sample of 24 videos and generated four responses (17% response rate) resulting in one sales-qualified opportunity (4% conversion rate). It was better than the last campaign.

Here is the big lesson learned: Creating a video is a time-intensive effort. Some sales reps had many outtakes when they did the recordings. I can relate to that… For each podcast, I need to record several times. I get it. Even though it’s hard to scale, the response rate was solid. The marketing team asked the sales team to do it again for holiday video campaigns. The results were good as well.

For the 3rd campaign, they decide to kick Campaign #1 up a notch by sending packages with positive online reviews, but this time they put them inside piñatas that were filled with candy. Real piñatas! I attached an image of piñatas on the transcript. I thought the idea was awesome.

They also switched up their messaging a bit by adding some social proof from one of their advocates, Amy Rosenberg. She shared personal testimony about her success with their platform and offered to speak with them via email. It added a nice human element to the campaign.

Results – After sending the “piñata-grams” they had a 36% response rate along with 3.4% sales-qualified opportunities. Their best campaign ever!

Here is the lesson learned: If you want to do account-based marketing, any conversational starter campaign needs to stand out and catch people’s attention, then having something as part of the outreach for your accounts to take action on. Truman said it well: “To strike a balance with all of their ABM efforts. The campaigns had to be flashy enough that people would take notice, and personalized enough that they would feel special—but inexpensive enough to be doable.”

I love Influitive’s examples so much that I added them to my client’s eBook and I made a podcast about it.

Thank you for sharing, Truman! A nice post, indeed! Well-done!!

So, 3 examples to share with you today. Are you doing account-based marketing? Love to hear your stories and challenges.

Again, send me your marketing questions or thoughts via Twitter @pamdidner

Be well. Until next time.