Episode 218 Quick Guide To Emotional Intelligence in the Workplace 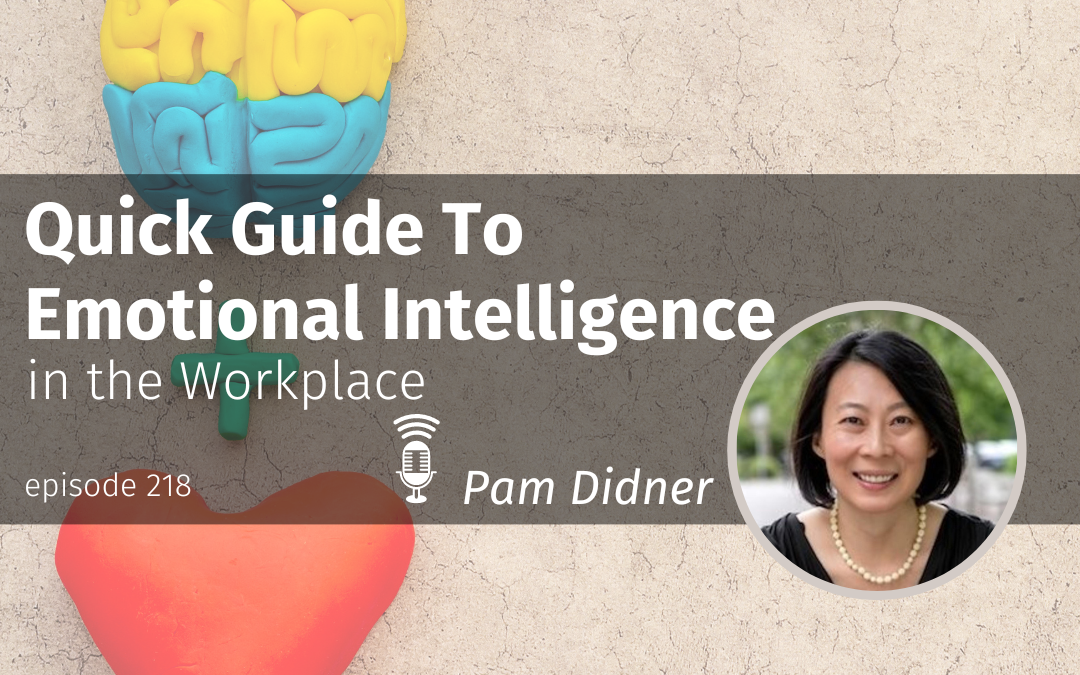 A big hello from Raleigh, North Carolina. I want to address an important question for this SOLO episode, but it’s not something discussed widely.

Today I’ll talk about how you can improve emotional intelligence.

Quotes from the episode:

“Sometimes there are underlying messages that others try to communicate. Still, they are either too polite to say things bluntly or unable to find the right words to explain their points of view.”

“There is no right or wrong way to improve your emotional intelligence. Still, a good starting point is listening intently, being open-minded, and imagining yourself in someone else’s shoes.”

A big hello from Raleigh, North Carolina. I want to address an important question for this SOLO episode, but it’s not something discussed widely.

That’s right, today’s question is how to improve your emotional intelligence.

So, what is emotional intelligence, also known as “EQ”?

Here is my definition:

EQ is the ability to see other people’s points of view and make an effort to modify your actions to reach a resolution during conflicts or disagreements.

Here is a definition from our BFF, Google:

EQ is the ability to understand, use, and manage your own emotions in positive ways to relieve stress, communicate effectively, empathize with others, overcome challenges, and defuse conflict.

So, possessing a high EQ allows someone to communicate with others from an empathetic perspective and defuse conflict positively.

Once you understand the definition, it’s easy to see the benefits of having a high EQ.

It can help you:

– Build better personal relationships with others

– Be a better version of yourself

How can you increase your EQ?

It’s not about hearing what others say; it’s about listening earnestly and attentively. Sometimes there are underlying messages that others try to communicate. Still, they are either too polite to say things bluntly or unable to find the right words to explain their points of view.

You need to listen carefully. The best way to be sure you understand is to paraphrase what you’ve heard back to them. Use words such as “Ok, let me try to understand…”, “Here is my understanding…”, and “Let me paraphrase…”

By regurgitating, you subconsciously open up your mind a bit, and your brain takes a mental note of a completely different opinion.

At the same time, you show others not only that you are willing to listen but that you “understand” them. The willingness to listen is a way to show compassion and empathy. Listening intently is the first requisite to improving your emotional intelligence.

2. Walk a mile in someone else’s shoes

Recently, I watched a 2019 movie called The Best of Enemies on Netflix; the Taraji Henson and Sam Rockwell film is based on a true story in Durham, NC, in 1971. An unlikely friendship was forged between Civil Rights Activist Ann Atwater and local Ku Klux Klan leader CP Ellis.

Honestly, the Rotten Tomatoes review is only 52%. The audience score is 76%, so take that with a grain of salt, but I think the film’s message is useful to our discussion today.

The story’s backdrop is that a Black elementary school was caught on fire, leaving students with nowhere to learn.

The city council found that the school was still usable, which was not true. Hence, NAACP helped to file a lawsuit and asked for the students to be allowed to attend the local white school temporarily. At the same time, the fire-damaged facilities were being rebuilt.

Rather than the judge making a decision, he decided to bring proven mediation expert Bill Riddick to help the town come to an agreement about what should happen.

Bill used an approach called a charrette, which invites everyone to have their say. He asked Ann and CP to co-chair the charrette, and through the open discussions, they narrowed down the issues they needed to discuss. The townspeople were divided into groups to brainstorm and hammer out different resolution points. Then, they would regroup as a whole each night for the wrap-up.

They also selected 10 people, 5 people from each side, for what they called the Senate. The Senate would vote on all resolutions on the final night of the charrette.

Many things happened during the film to shift CP’s mindset. Still, a pivotal moment came when he visited the fire-damaged school in the summer, typically a leisure season for children, where Black students were still attending school to try and make up for the lost time. It was then that he began to have a real change of heart.

Spoiler alert: He cast a pivotal vote for the resolution of school integration. At the end of the movie, you can see the real Ann Atwater and CP Ellis sharing their own stories.

Walking in someone else’s shoes always profoundly impacts all of us, whether we agree with that person’s point of view or not.

You don’t need to agree with them, but you need to be able to see where they’re coming from and why they do certain things or think in specific ways. Sometimes, learning to accept differences is one way to move forward. Other times, making a pivotal change is a way to move forward.

Ultimately, your level of emotional intelligence directly equates to your level of empathy. It will affect your ability to healthily resolve conflict and form and maintain relationships in your personal life and at work. So, it’s well worth examining where or how you can make adjustments and improve.

Honestly, I am not a very emotional person.

My take on life: it’s tough (life is tough, so deal with it!), and as humans, we often have to deal with it. Although plenty of people share that viewpoint, it doesn’t mean that everyone is on the same level, so I need to remember to check myself to avoid coming off as an ass.

We all deal with hardship differently, so it’s essential to be sensitive to others’ coping mechanisms.

I’ve become more sympathetic over time, but I won’t lie; it’s taken patience and practice! Life experience and interactions with many people have taught me a few things, such as putting myself in other people’s shoes.

I want to end this video with a quote from Brene Brown:

“Empathy has no script. There is no right way or wrong way to do it. It’s simply listening, holding space, withholding judgment, emotionally connecting, and communicating that incredibly healing message of ‘You’re not alone.'”

There is no right or wrong way to improve your emotional intelligence. Still, a good starting point is listening intently, being open-minded, and imagining yourself in someone else’s shoes.

What do you think? I’d love to hear your thoughts.

Enjoy the podcast? Subscribe to the show on your favorite podcast platform, leave a 5-star review and subscribe to Apple Podcasts.

If you prefer watching a video, I also have a YouTube Channel; check it out and subscribe.

If you want to chat, reach out to any social media channels or email me at hello@pamdidner.com. You can also join my Facebook community: Build Your Marketing Skills to Get Ahead. When you join, you get a free Starbucks on me. You can go to the Announcement tab and click on the barcode of the gift card.

To expand your knowledge about emotional intelligence, and how to boost your career check out some of my previous podcast episodes, blog posts, and video.

4 Tips To Overcome Imposter Syndrome and Boost Your Career

How To Build Better Communication With Your Sales Team

Breaking Bad News In Business: Three Approaches To Use

How to Build Confidence and Overcome Imposter Syndrome