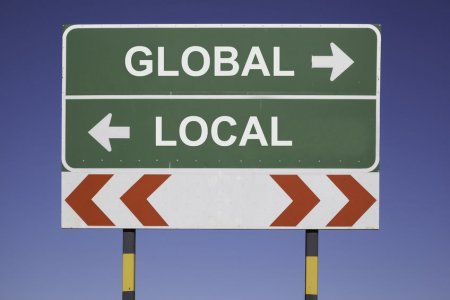 If you market your products and services across different countries, you likely encounter the discussion of global vs. local or standardization vs. localization. There is no one-size-fits-all answer. The delicate balances are dictated by:

If the products are heterogeneous, messaging and creative development of campaigns will naturally tend toward more customization. If the budget is more centralized, assets are likely to be managed at the corporate level. In addition, headcount, roles, and responsibilities can also influence the balance of global vs. local.

“Think globally, act locally” may make sense, but we really need to think and act both globally and locally in the digital world. With news traveling in lighting speed, the local news can easily go viral and become national or global news. And global news can easily be accessed remotely via mobile phones.

The line between local and global continues to blur which means global and local teams need to ideate strategies together to secure a wider, more impactful reach.

Every part of your plan needs both a global and local perspective. This is especially powerful when you are implementing a regional content marketing plan. The plan will require you to think and act locally but tie actions to a global strategic plan that affects every aspect of the company.

Marketing examples showing the merging of global and regional applications

Airbnb might have got its start by craftily crawling local Craigslist listings, but they have grown to become a truly global brand. Since their early days in 2008 in San Francisco, California, Airbnb has expanded to 1.5+ million listings, allowing users to list and book accommodations in more than 34,000 cities around the world.

I think we can all agree that 34,000 cities constitute global reach. So, how does Airbnb keep that personal touch and integrate with the local culture everywhere that it calls home?

Airbnb gave 100,000 customers a $10 gift to perform random acts of hospitality for strangers and either take a photo or video with the stranger. This is a great example of global without much of localization.

It was easily scaled across regions using the same hashtag. Spreading random acts of kindness is relatable from region to region, and from culture to culture.

The $10 gift acted as an extra incentive to motivate people to act. A clear-call-action and monetary incentive enticed people to engage and built awareness for Airbnb. It also encouraged people to use the gift card to book Airbnb listing and drive traffic to their sites across countries.

This campaign was so successful, it engaged more than three million people in less than three weeks.

This is a great example of finding the balance between having a local persona while playing on a global playing field.

US fast franchises such as McDonald’s, Subway, Domino’s Pizza and Dunkin’ Donuts are popular outside the US soil. I was surprised to see Dunkin’ Donuts in Lima, Peru and my tour guide told me that it’s very popular.

Both Dunkin’ Donuts and Domino’s Pizza have designed local customization for this experience by shifting the menus to meet local cuisine traditions.

Although National Donut Day may be a US-centric ‘holiday,’ Dunkin’ Donuts utilized that to activate other branches outside the US to celebrate by promoting special-featured donuts for that day! On June 1, Dunkin’ Donuts China served dry pork and seaweed donuts. Other variations included Korea’s Grapefruit Coolata, Lebanon’s Mango Chocolate Donut, and Russia’s Dunclairs. Again, Dunkin’ uses the US Donut Day to promote special localized-flavored donuts to drive traffic to stores. A nice touch of think Global and Local.

Similarly, McDonald’s has a global brand that they tweak for international markets. You’ll find the Sakura McFizz in Malasia, the Tsukimi Burger in Japan, and the Wasabi Filet-o-Fish in Hong Kong, but none of these items are available in McDonald’s original market, the United States. The localization is essential given that products are localized from the get-go, therefore, the marketing campaigns take on the country-led approach.

Starbucks is another US brand that has expanded its footprint across the globe. As well as tweaking its menu and messaging for the local market, Starbucks is gaining attention every year when it launches it’s annual “red cup” for the Holiday season.

What began as a way to add some holiday cheer for latte lovers in the US has become an international trend and even caused a little controversy along the way.

In 2015, Starbucks reached out to local consumers around the globe with the #RedCupContest on Instagram. The campaign sought to capture creative posts of people with their Starbucks red cups during the Christmas holiday in 2015.

Starbucks created a contest that gave away five grand prizes of $500 and got more than 40,000 posts from Instagram users. They repeated this campaign a year later and in 2017, they provided a canvas for you to share by turning their coffee cups into a seasonal scene that you could color in once you’d finished your caffeine fix.

To run a global campaign or a local campaign of a global brand, you need to think about how to best leverage the creative, content and other assets that the global team can offer.

The coloring cups that Starbucks printed gave their fans a blank slate to share their local view of their love of this brand.

You also need to take into account how to energize the local audiences with a local touch. The delicate balance of global vs. local is something you need to gauge when you design your marketing campaigns.

Social media made us global citizens and sometimes it’s much harder to have a local impact. As marketers, it’s our job to understand what stays global and what to localize.

The best way to go about it is to understand your audiences well and work together between the headquarters and local teams from planning to executions.

Think and act globally and locally.